So, this has nothing to do with sugar.  Or food.  Or anything even edible.  And it’s about someone I don’t even know.  And no one is really even reading this, but I just feel the need to share it, on the off chance that the one person that needs to read this, does.

Two weeks ago, I found out about a woman named Joanne Heim.  She is 38-years-old.  She is married with small children.  I don’t even know where she lives.  But I do know that on January 11, 2011, she had a massive stroke and was found on the basement floor by her young daughter.  She is currently still in the hospital, and will be for a long time.

Her blog is The Simple Wife.  It is being updated by her husband, Toben, of her progress and daily battles.  Joanne’s sister, (who’s name I also don’t know) writes about it through her eyes and photos at KH Photography.  (She is an amazing photography, btw).

I don’t even know this family, but God has really placed them on my heart.  So if you have a moment, please click on the links above and read this family’s amazing and inspiring story.  It will touch your heart.  And if you pray, please add them to your daily prayers. You will be among many that are #PrayingForJoanne.

Let me start by saying that I do not like potato soup.

This is coming from the lover of all things potato.  Mashed potatoes.  Baked potatoes.  Potatoes Au Gratin.  French Fries.  Hash browns.  Potato Chips.  Fried potatoes.  Skillet potatoes.  (I think you get the point).  There is no form of potato that I don’t like.  Except for potato soup.

For some reason, there is just something off about potatoes in liquid form.  In soup form, I will pass on the potato.

So, you can imagine my level of excitement when I went to a jewelry party where dinner was provided, and the main dish was, you guessed it, potato soup.  But, my aunt (aka Betty Crocker) was the one who prepared it, so I decided out of courtesy, I’d give it a try.  I could choke down a few bites then move on to the lemon cake and raspberry cheesecake bites, and all would be well with the world.

I scooped a very small cup and proceeded to take my first Squidward bite, looking around to make sure no one was paying any attention at the minescule amount of soup that was on my spoon.  I smiled at the woman across the room, gripped my cup of apple cinnamon cider for a quick chaser, and took the bite.

Then, something odd happened.  I didn’t gag.  And more surprisingly, I almost enjoyed it.  Surely not.  I took another bite just to verify that my gag reflex was still in tact.  I swallowed even more slowly, just to make sure.  But low and behold, this soup was good.  How could that be?  It’s potato soup.  “Good” and “potato soup” have never mixed in the same sentence from me before.  But on this cold night, they did.  I then proceeded to eat 2 more cups and asked for the recipe on the way out the door.

Since that night, I have made this soup 3 times in six weeks.  And two of those times were in a 4 day period.

So, I feel the need to share this recipe with the world.  If it can make me eat potato soup and actually enjoy it, maybe it can rescue someone else from the liquidly blandness previously known as potato soup.  I hope this will set you free, as it did me.

Oh, and the recipe calls for 2lbs cubed potatoes.  Feel free to cube your own, but I have 3 kids, a self-employed-work-from-home husband, 4 cats and a somewhat house-trained dog, so Ore-Ida was kind enough to cube mine for me.  And freeze them.  Aren’t they nice?

1 stick of butter (I used salted)

4 chicken bouillon cubes (confession: I had to go look in order to spell it correctly)

Salt and pepper (to taste)

Milk or water (for thinning)

In a dutch over (or equivalent), melt butter.  Once melted, add the flour.  Stir until mixed thoroughly, then cook lightly for several minutes to thicken.  Stir occasionally to prevent scorching.

Add half & half.  (You could use milk if you like a thinner soup, but I like the richness this adds).  Mix, then add bouillon cubes.  Cook on medium until cubes have dissolved.  Stir as necessary.  Add the onions.  Season with salt and pepper to your taste. Mix well.

Add the potatoes.  (You can also use the kind that have peppers and onions already in the package if you’d like, or you can add fresh.  My kids don’t like any green pieces unless they have chocolate in the middle, so I stuck with just the regular kind).  Stir.  Add ham.  Mix well.  Cover and cook on low for a few hours.

You’ll need to check it periodically and add more liquid.  You can use milk or water  Just add a bit at a time to bring it back to the desired consistency.  Taste occasionally to check seasoning.  Add salt and pepper as needed.

Once the potatoes are soft and start to separate, it’s done!

Serve in a sour dough bread bowl for an extra touch of magic.

NOTE: My aunt recommended not making this in a crock pot.  She said for some reason, it separates sometimes on her when she did.  She said stove top does not do that.  So, use a slow cooker at your own risk.

ANOTHER NOTE: I am not a photographer.  I don’t even pretend to be one.  I got a T1i for Christmas, but have yet to learn how to use it.  I tried to take a picture for this, but I could not make the soup look appetizing.  I tried a green bowl, a white bowl, a cup, a mug – it all just looked like white mush.  So, no picture.  You’ll just have to imagine how beautiful and tasty it’s going to look.

I hope you enjoy this recipe as much as we have.  So go… live long, prosper, and eat potato soup.

So, I write 3 posts, then disappear.  Great start for a blog, eh?

Since my health has been keeping me from playing in the kitchen, and since I didn’t have this blog when I started decorating cookies back in September, I decided to do a flash-back of my prior attempts at sugary art.  (Plus, this will give me something else to look back and laugh at years from now.  One can never have enough of those logged away).

It all started when I stumbled across a website – Bake at 350.  There was a guest post by a woman named Marian (who I later learned is Sweetopia to the rest of the world) about marbeling sugar cookies.  I had been making cakes, cupcakes, truffles – but never tried decorating sugar cookies.  But with this post, I was intrigued.  I could do that, right?  As I looked through their sites further, I realized that it was something that had to be done.  I had to decorate sugar cookies.

I used the recipes listed on these sites, grabbed my toothpicks and away I went.  This was the result (please forgive the photo quality.  iPhone camera): 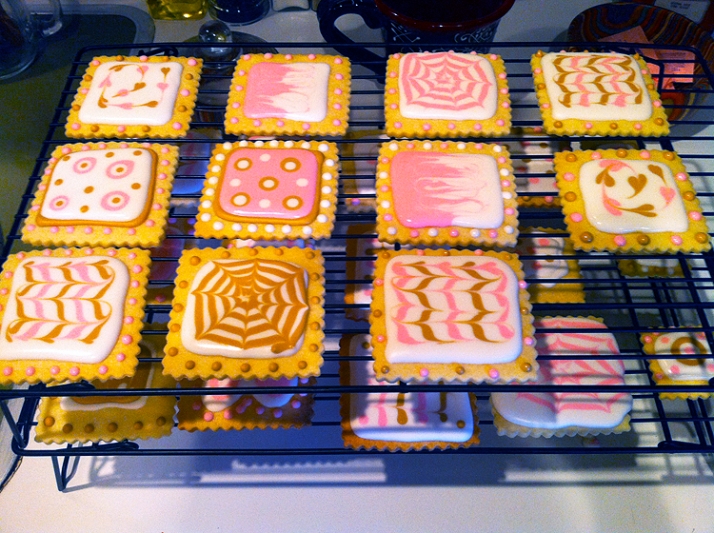 Some of them look better than others (my friend said they look like fancy pop tarts), but I was hooked.

I made a ton of them, so I passed them out to friends and neighbors, one of which was an 86-year-old couple across the street.  Then, a funny thing happened.  This couple’s daughter came by that day and saw my cookies.  She said she’d seen lots of decorated sugar cookies, but none like this before.  She also, coincidentally enough, had a friend that was looking for a new cookie lady, as hers had just retired.  The couple gave their daughter my name/phone number, the daughter gave the info to her friend, and 2 days later I had an order for 5 dozen cookies for a 4-year-old’s birthday party!   (I didn’t even have any cookies cutters other than the squares.)

Not the greatest in the world, but she was really happy with them.  And I was hooked!

I saw some butterflies on Sweetopia’s site, so naturally, I had to try those.  So I bought more cutters.

How about some fish?

I posted all of my cookies on Facebook, and my girlfriend said that her daughter was turning 7 and would be having a small party at her school.  She had seen my cookies on FB and wanted me to make some for her daughter’s party.  Unicorns.  Pink and Purple.  (Of course)  So, I bought more cutters.

And I had seen the cake idea, so I made a big one especially for the birthday girl.  (Do my photography skills rock or what?  {insert sarcasm here}) 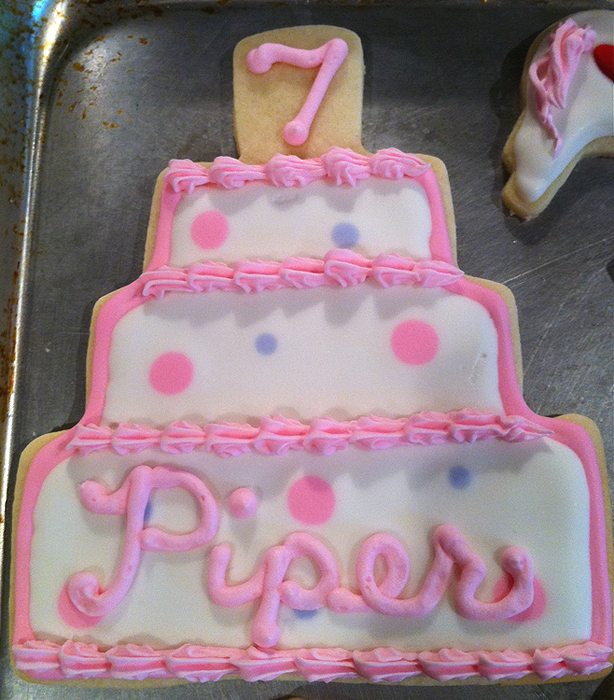 Then my aunt that lives next door heard about my cookies (ah, the joys of a small town) and asked me to donate some for a local fundraiser (“some” = 8 dozen decorated and 16 dozen drop cookies.  Family can be so great sometimes):

Then, Halloween came a knockin’, and I ended up making a total of 26 dozen of these babies for various people.  It was completely overwhelming for me, and it took F.O.R.E.V.E.R.  And of course, I had to buy more cutters.  (are you seeing a trend here…)

Here are the platters I took to my daughter’s kindergarten class.  (I like the “Boo” ghosts better)

Next came Thanksgiving, which again – more cutters.  I used this holiday as an excuse to play around with different cookie flavors.  I used the chocolate and spice cutout recipes from Bake at 350.  The spice was a nice addition to the regular ones for fall.  But the chocolate ones stole the show. And the design for the turkey is also from Bake at 350.  I saw a lot of different turkey cookies, but I thought hers were the perfect mix of fun and realistic.

Well, thank you if you’ve made it this far.  I really do love decorating cookies.  And I’m starting to think there is no longer a cookie cutter I don’t own.  (It’s amazing how many you can acquire in such a short amount of time).

Now what to make for Valentine’s Day?  I think I need a new cutter.